I learned about lensmob a couple weeks ago from Frank and I am really excited to use it. Once an album is set up, anyone with the email address can send a picture to it. I plan to start by having students in each class (each has its own album) send pics of their whiteboards both for later reference as well as in case we don’t get to all of them in a particular day. I hope to expand the use later as well. 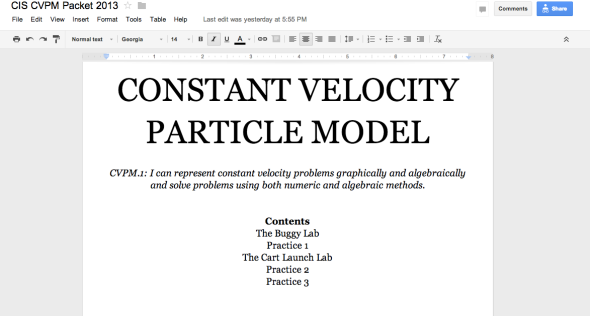 Lots to write about here, but I’m going to try to keep it short by promising to write later about the cart launch lab. I was inspired by my colleague Ben who put together an amazing packet for the regular physics classes at our school. I was planning, for my college level class, to jump right into problem solving in constant velocity. After looking at what Ben had done and cross referencing with Kelly, I decided I needed more conceptual materials before problem solving. Thus I put together a packet that draws largely from Kelly and the standard modeling materials. The main difference, however, is that class I teach, since it is articulated through the University of Minnesota, emphasizes algebraic problem solving more so than modeling instruction. Thus I wrote a new worksheet, practice 3 in the packet, to deploy the model. It emphasizes solving the problem algebraically but using graphical methods to guide and check the answer. Let me know what you think, here’s a view only copy of the packet.

Today my colleague and I were looking into ways to rearrange our room to better support both whiteboarding and labs, and one of the stumbling blocks was leaving enough room in front of our demonstration table for students to present whiteboards. Then we discovered that we already had hangers on the whiteboard behind the demo table that held the whiteboards just fine; hello extra space!

Today my colleague Ben and I sought to revisit why and how we do lab reports. We started by identifying what we want students to be able to do (Goal), then listed the specific skills they need to be able to do so, then (moving to the pictures below), wrote down the steps we think we need to teach to students to get there, and finally outlined how that would look when a lab is being completed. 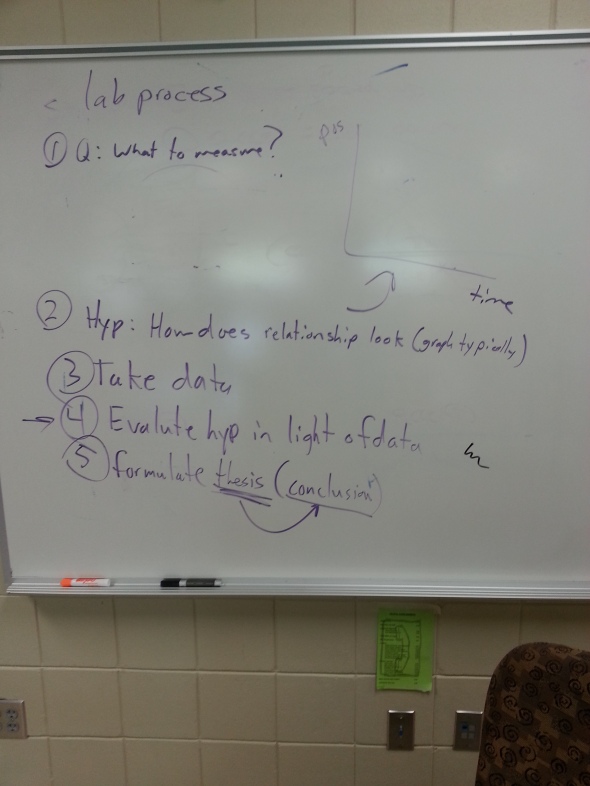