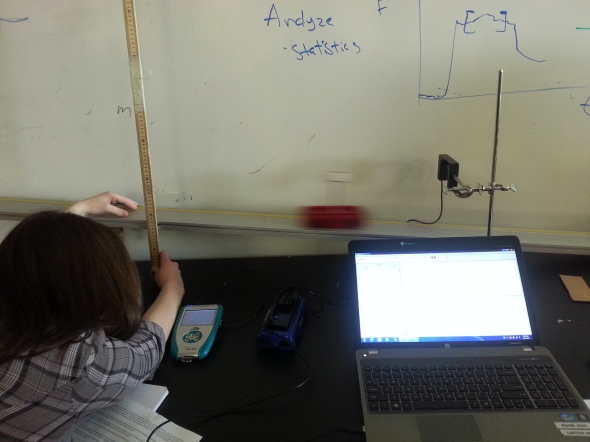 Today we started the lab aspect of deploying the Energy Transfer Model. We used this handout (modified slightly from the official U of MN lab for energy which is available in large PDF here). Students are asked to derive a formula for predicting the final velocity of a cart at the bottom of a ramp, and then we linearize the formula so the slope is 2g, which is pretty neat. The data works out pretty good. Next they will start planning their own verification lab.

I just love how this whiteboard shows how multiple representations support problem solving and allow for more complete understandings. This is problem 4 from practice 3 here. I got in the practice this year of making students always find the area of the F parallel vs. x graph for work done, because I like the calculus connection and the more completeness of the definition of work as integrating F dot dx (I don’t use dot product here, but it’s a quick extension if they see it again). Also, energy bar charts really revolutionized how well my students understand energy transfer, particularly when the energy of the system is changing due to work being done. 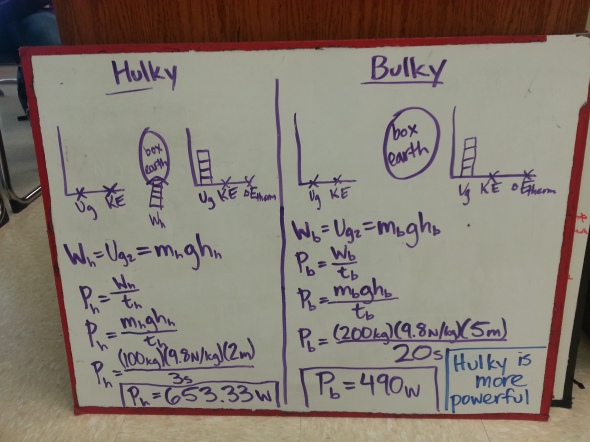 Power is so easy to introduce once students start to understand energy transfer. This year I introduced it in one problem (#7 on practice 3 here) and then expanded on it as well as brought together some other aspects and models in a follow up problem, #8.

Day 104: Current and Past Success

Yesterday I was a bit dismayed at how problem solving and whiteboarding was going. Then some people left some comments, and I tried what Frank suggested for problem 6a and b from Practice 3 here, and it was perfect. Particularly for this set of problems; the students were asked to first solve the problem using CAPM and UBFPM (constant acceleration and unbalanced forces), then to revisit it using energy. Instead I had half the class do one, half the other, then they paired up and explained their method to the other pair. After that I asked them to reconcile that the two equations were actually the same…which took a bit of rearranging or substituting slightly different variables, but they all got there eventually.

Yesterday and today helped me remember that I have seen some success (here and here) with getting kids to dialogue for problem solving, just not in the large group presentation style. That’s what’s been working for me, but I’m sure that will evolve as I get better at facilitating discussion (still got a ways to go, but happy with the progress so far). Thanks everyone for helping me out!

Day 103: Questions for the #modphys Community

I feel like I’ve tried just about everything for problem solving in my college level physics class. This time around it was having the students work on problems yesterday (1-5 from this packet), then today we whiteboarded the problems. In my first period, we both played the mistake game and I had students in a circle. We had multiple groups with the same problem, presenting at the same time, and we compared whiteboards. In 2nd and 3rd hour I had them do more standard whiteboard presentations, as the circle didn’t feel right. In all cases, and in the many ways I’ve tried in the past to present problems on whiteboards, I didn’t feel like the time spent was worth it, particularly compared to simply having students simply work problems with me circulating, giving tips, and occasionally going through parts of the problem on the board.

This is as opposed to whiteboarding conceptual aspects; I see LOTS of benefit in those conversations.

So here’s my questions;

Comments are great, since we can have continued discussion, but twitter would be fine too. Thanks in advance for any help you can give me!

Today in class I let students work with whoever they wanted to on some problems that we will be whiteboarding tomorrow. At some point a cheer went up for a group in the back, and it turned out they had just figured out something about a problem they had been stuck on. It was awesome. So, naturally, I made them reenact it.

Today we did some unit analysis and defined the Joule. It’s funny that units actually combining and dividing out properly blows students minds. 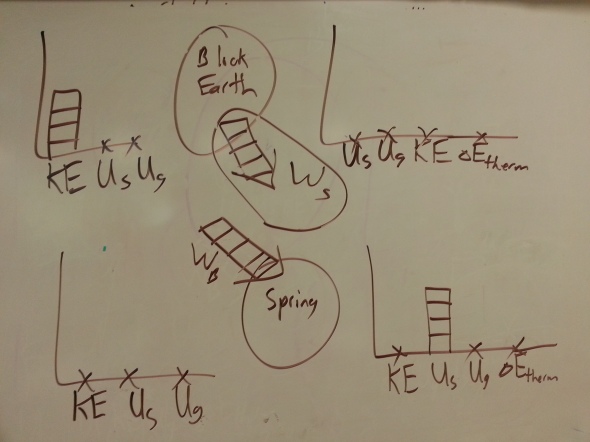 My colleague Ben gave me this idea. He showed me how you can write a second energy bar chart for objects that are not in your system and show how the energy that is transferred out of the main system is transferred into the secondary system. No matter the system definition, energy is transferred and stored, but what changes is simply how we are tracking that. This is definitely something I didn’t understand after my first year teaching energy this way (essentially from a 1st law of thermodynamics perspective), and I’m sure it will become more nuanced as I get more used to it. One thing I am thinking about emphasizing more next year is the link between free body diagrams and energy transfer, in that forces in or against the direction of motion cause energy to transfer, though sometimes that is within the system and sometimes  adding to or taking from  the energy stored in the system, depending on the definition. Lots to think about here.

Recently, when students are presenting whiteboards and either (a) we get that ‘deer in the headlights’ look, or (b) something really puzzling or difficult comes up, I have been stopping the presentation to have all the student pairs discuss what they think about the topic. This does two things, I think. 1) It gets the audience more involved, and 2) it gives the presenters a chance to regroup and think about what they want to say. I’ve been enjoying this twist on whiteboard presentations.

Students have a hard time believing that the temperature of materials increase when other forms of energy are transferred to thermal energy through friction or collisions. I wanted to show them that the temp does actually increase, so 5-6 years agoI started using a hammer to hit silly putty embedded with a temperature probe. After missing too many times I started dropping a shot put instead, then switched to a bowling ball (more awesome), and this year due to an interaction with Gary  (IIFC) I switched from using Silly Putty (which essentially explodes and gets everywhere) to using play doh, much cleaner. It’s pretty great, I usually see about a degree increase in the temp, certainly convincing enough that thermal energy has increased in the play doh.

Also, I recorded my colleague Ben performing the demo last year. Note his dedication to the results.