I started Universal Gravitation today (we do CFPM earlier and then come back to this, I like to spiral concepts when possible and I like revisiting CFPM after energy to address that no work is done by centripetal forces), and this is how I started. I liked it a lot. I was amazed at how entrenched the misconceptions are….students really wanted the force on the sun to be smaller than on the earth.

In this problem, students had first looked at what would happen if Gravity took place far away from any planets (to remove, well, gravity from the situation…) and she threw an oxygen tank at 3 m/s. In this portion, they were asked how the situation would change if both Sandra and the tank were moving at 4 m/s and she threw the tank in the opposite direction of the motion. The students really wanted the tank to be moving backwards. We had a great discussion about it.

As we go through conceptual aspects of circular motion, students are starting to confront their misconceptions with what they think should be true based on what we’ve studied. This group was a fascinating example; they ‘knew’ that the net force should be toward the center of the circle in the yoyo problem (Problem 4 of Practice 1 in this packet, the descending part), so they tried to make the tension at an angle. They got up and in front of the class and immediately addressed their conflict, that if they draw tension sideways the net force is angled, which they didn’t think could be correct, but that it didn’t seem to make sense to have the tension angled. Discussion helped them and the rest of the class realize that centripetal force can be a component of the overall net force if the circular motion is non-uniform. 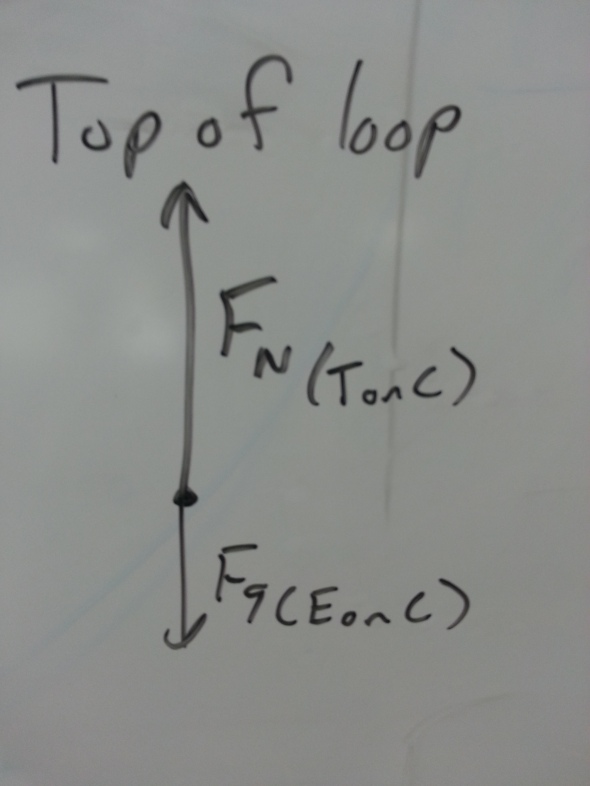 We’re doing circular motion whiteboarding, and students still really want the force to be unbalanced upward at the top of the loop. We’re making progress though, it helps that students can directly confront their misconceptions through dialogue. 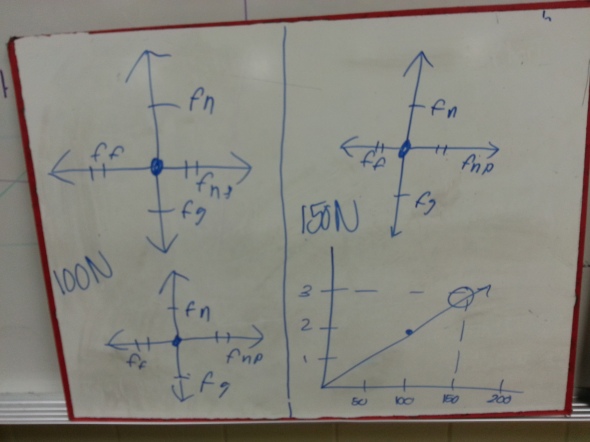 In this scenario a sled was being pushed at a constant velocity 2 m/s, then the following question was asked;

c. Describe, in terms of the amount of force he would have to apply, what the player would have to do to make the sled move with a constant velocity of 3.0 m/s. Assume that the frictional force between the grass and the sled remains the same under all circumstances. Illustrate your answer with diagrams and/or graphs as appropriate.

It continually astounds me that even though we have had days of conversations about constant velocity and balanced forces, the idea that a higher speed requires more force is firmly rooted in their brains. Another group gave pretty much the same reasoning below. The only way we can expunge misconceptions is to address them head on!

Day 46: Misconceptions are Tough to Eradicate

It’s telling to the power embedded misconceptions that even in a research based classroom where we addressed this idea for 3 days, students still want forces to be balanced at the top of the path of a projectile. 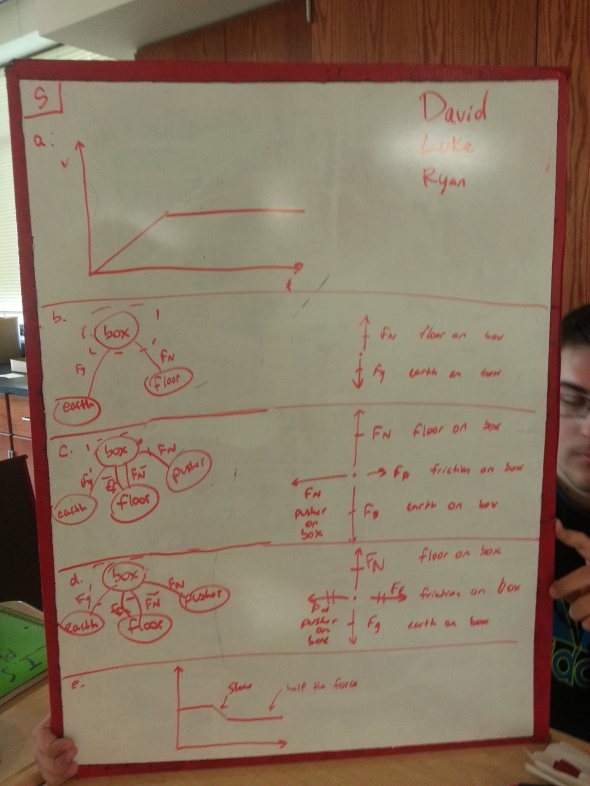 Part e of this question (find it as #5 in practice 1 here) asks students what would happen if a concrete block that was previously being pushed at a constant velocity was pushed with half the force while friction stayed the same. Most groups had something like the graph labeled e. above, at the bottom, so we had some good conversation.