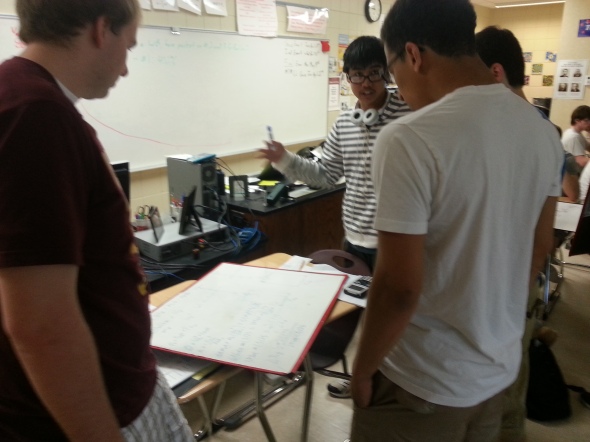 A couple weeks ago I lamented that I didn’t feel like I had good methods for whiteboarding difficult problems. I took some of the advice I received in the comments and skipped a couple easy MTM problems, then had half the class whiteboard one problem, the other half a different problem, then they explained it to each other. I then had one group present to the class for each problem as well to wrap it all up and make sure all students know how to solve it. I was happy with this method today, thanks to my PLN! 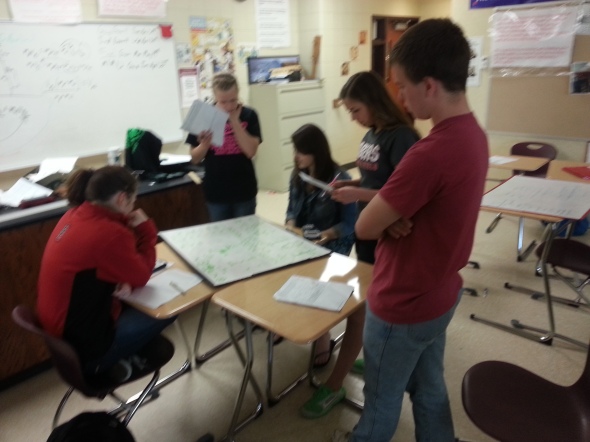 I was grading some formative assessments I gave yesterday and a student drew their momentum bar chart differently. I LOVE that this shows the total momentum of the system as the total area of the bar! This would only work well with equal masses though (which happened to be the case here), as the heights of the bard are the same (on the vertical axis, velocity is on the horizontal axis).

Today we tested to see if momentum was conserved in explosions. This group took it to the extreme, which I fully endorse. 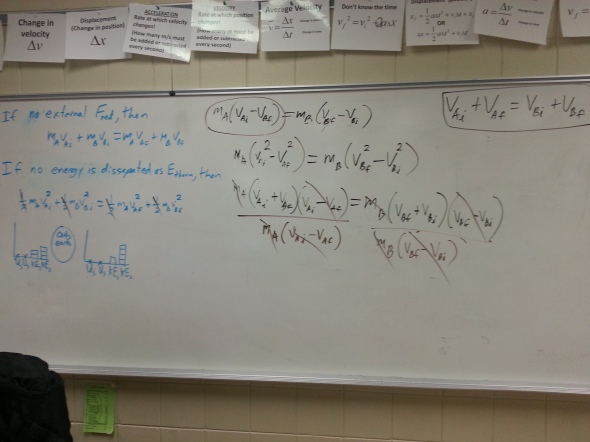 This is one of my favorite derivations. I come back to the assumptions many times over the next couple days. 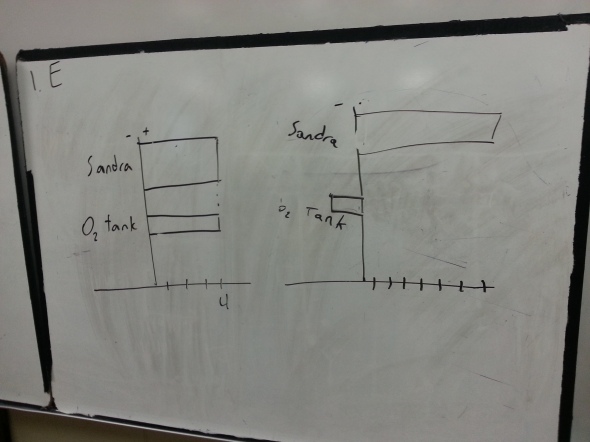 In this problem, students had first looked at what would happen if Gravity took place far away from any planets (to remove, well, gravity from the situation…) and she threw an oxygen tank at 3 m/s. In this portion, they were asked how the situation would change if both Sandra and the tank were moving at 4 m/s and she threw the tank in the opposite direction of the motion. The students really wanted the tank to be moving backwards. We had a great discussion about it. 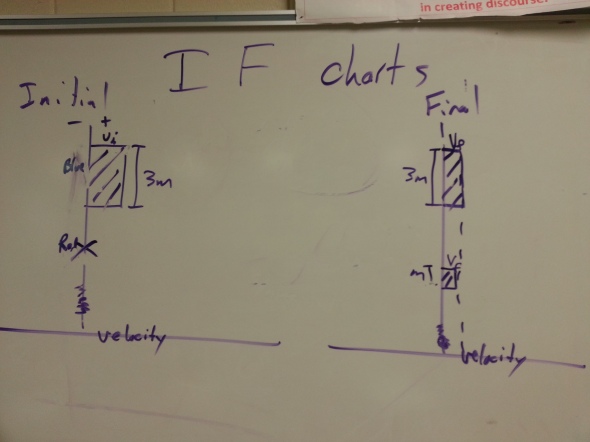 Today I used a cart of mass 3m smashing and sticking to a cart of mass m to introduce IF charts. I really love how we can look at how the individual momentum changes (the momentum of cart 3m decreases while cart m increases) as well as look at initial final momentum (hence IF, initial total should equal final total so long as the external net force is zero). 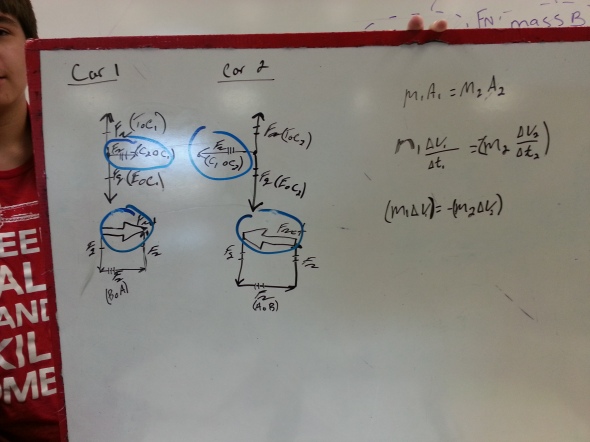 For a few years now I’ve been building the momentum transfer model using an empirical approach, but this year I decided to have students try to derive conservation of momentum first. I did this for two reason; first, time (we have had 6 snow/cold days this year). Secondly, I also did this for time reason during projectile motion, and I found that students really like the idea that they can use their prior knowledge of models to figure out something new.

To do this I walked around and asked groups lots of questions, guiding them to get to conservation of momentum. Once groups got to the point of attempting free body diagrams, I had a group present and we had a great time re-learning Newton’s 3rd Law (it’s still amazing to me how strongly their misconceptions are rooted: “but if one has a bigger mass, it MUST exert a bigger force!”). From there students went back into groups to finalize, and we had presentations at the end as well, particularly to discuss why the change in time must be the same for both objects. 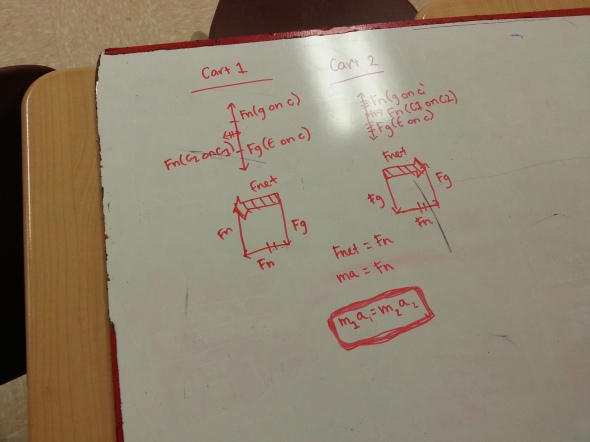 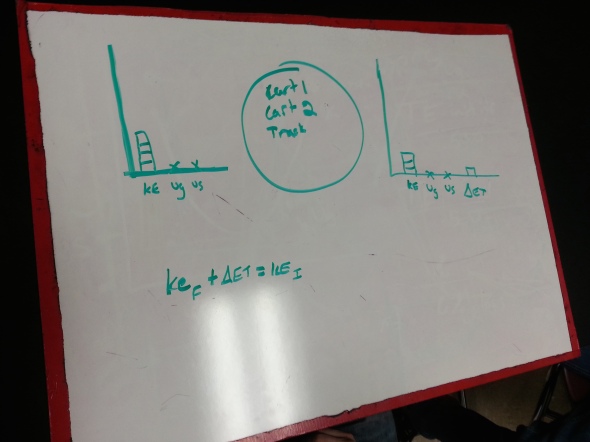 I end the energy unit, and start the momentum unit, by asking students to analyze two carts crashing and sticking together with velcro. I ask them to predict the final velocity using energy transfer. The above board is where students hit the snag in trying to do so. We can’t measure changes in thermal energy easily!

What’s interesting is that when I did this last year most kids left out the change in E_therm. I know I did a MUCH better job the second time around in the modeling energy unit this year, and this is a sign of that. Today’s activity was much more interesting last year, however, because they all assumed no change in E_therm, so when they went to try it in the lab, they were surprised. This year I just asked groups when they got to the point above, “Can we measure changes in E_therm?” “Uh….no…” “Right, so let’s neglect it and see what happens.” Then their prediction doesn’t work out, BUT they see that the final velocities do have a pattern to them, which drives the development of the momentum transfer model. I wrote more about this process in this post.

Oh, also, I showed kids double LOL’s a while back, and a couple groups tried it on this scenario, which was really fun to converse about. 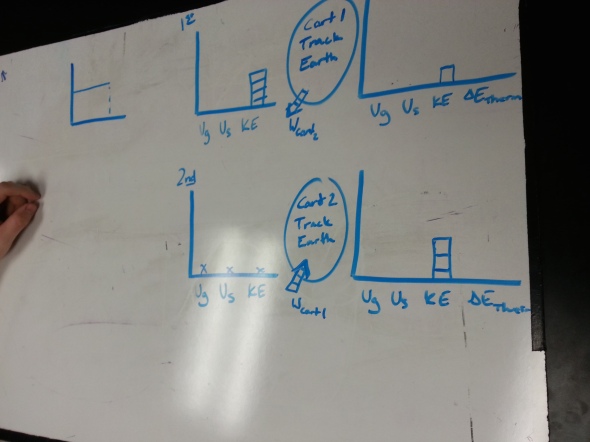